Crystal-Rose Lee in Her Own Words

Vancouver-born Crystal-Rose was six when her best friend took up skiing at nearby Cypress Mountain. Says Crystal-Rose, “I’m an only child so I take my inspiration from friends. I really wanted to try it, so I begged and pleaded with my mom.”

Unfortunately, Mom had other ideas, notably piano and ballet. The lone athlete in an academically driven family, Crystal-Rose was told that she was too small and would get hurt. Fortunately she finally got to ski when she was eight years old.

“It was love at first turn,” says Crystal-Rose, “I loved going fast and being able to control my speed. I loved the freedom. When you’re eight years old, you don’t have a lot of control over your life. Skiing was something I loved instantly and could do on my own.”

One year later, having rapidly outgrown Cypress Mountain’s Ski School program, Crystal-Rose faced a choice: go freestyle bump skiing or go racing. “I chose ski racing because I loved to go fast,” she says. “I looked up to Kerrin-Lee Gartner and Picaboo Street. But more than anything, I just loved being on the mountain. I wasn’t the best skier out there. I just really enjoyed it.”

Crystal-Rose’s parents immediately saw what a positive outlet skiing was, “regardless of how fast they didn’t want me going,” she says. “Mom was one of the most supportive moms out there.” A college educator, she would drive her daughter to the mountain, then grade papers in the lodge. To afford the four pairs of new skis Crystal-Rose needed to race, Mom worked part-time in a ski shop. She even worked for the Ski Club to help pay the annual membership dues. The only thing she didn’t do was ski. Says Crystal-Rose, “She tried it once. It was too scary.”

As for her scientist father, “He watched me race once when I was twelve and just didn’t get it but he always supported me behind the scenes.” 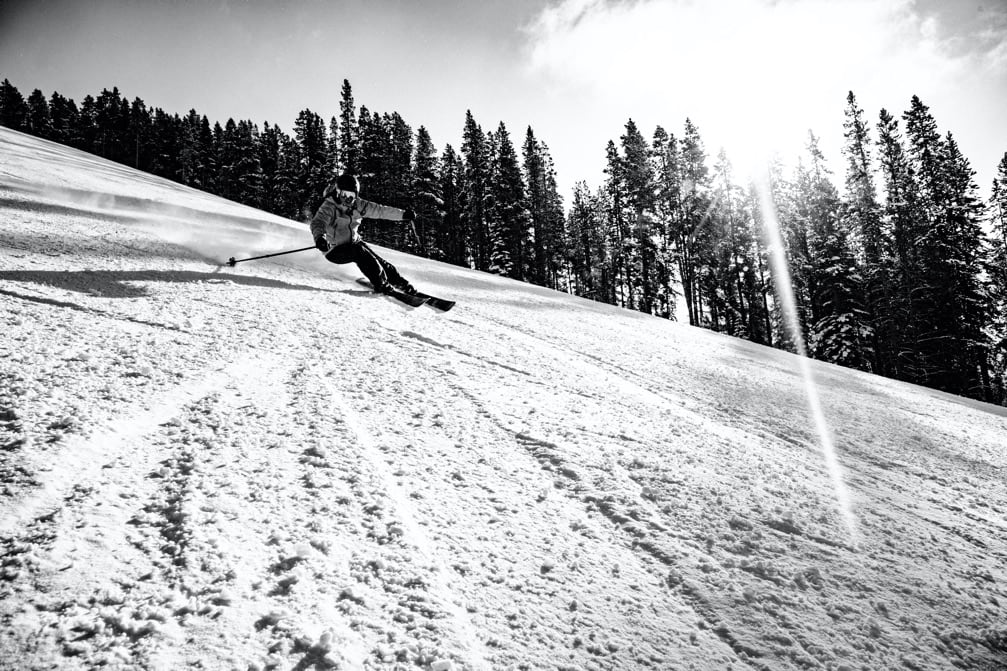 After two years, the academic and financial stresses of FIS racing were starting to show. “Both my parents said I could continue if I wanted to, but it didn’t feel fair,” says Crystal-Rose. “It was way too expensive.” A gifted athlete, Crystal-Lee also excelled at Track & Field. Unfortunately, an untimely injury dashed her dream of a pole-vaulting NCAA scholarship. Then her SATs came in. “School tests totally stressed me out,” she says, “and I bombed, so I decided to take a year off.”

One night she and her then-boyfriend went to see a Warren Miller movie. Says Crystal-Rose, “I was like, yeah! I need to do that (laughs)!!! So I dumped my boyfriend, quit my job, booked a level 1 Ski Instructor course, told my track coach I’d be back in April and moved to Whistler; all in just three weeks!”

That Christmas Day Crystal-Rose Lee gave her very first ski lesson. She’s lived in Whistler ever since. Becoming a pro skier has many challenges. The biggest, by far, was financial. To survive, Crystal-Rose taught skiing by day (which was half the dream) and worked simultaneously in retail and catering by night. (Working for the mountain earned her health insurance and an otherwise unaffordable season’s pass.) In between those gigs she balanced photo shoots, entering local skiing competitions and networking to get her name out there in the industry. One very determined lady, Crystal-Rose was going to make it work anyway she could.

“I was really lucky to meet a group of people (90% male) who took me under their wing,” she says. “They said, ‘why don’t you ski with us?’ I just wanted to make friends, so I had to keep up. I scared the living crap out of myself a few times. But it actually worked and laid down the foundation of my big-mountain skiing style.”

Friends encouraged Crystal-Rose to join the World Freeskiing Tour. I said, “I don’t want to compete anymore. I’m done. I’ve raced. I’ve done Skiercross, Park & Pipe. I don’t need to compete.” They said, “You can totally compete, you have the drive and the skiing strength to do it. Now do it.”

‘It’ finally happened in 2007 when Crystal-Rose skied Red Mountain with her friend Holly who’d secretly planned their trip around the Canadian Freeskiing Championship. Holly said, “All you have to do is look for a line that you like and ski it really well. Ski to the best of your ability and finish within the corral. Don’t crash or you’re out.” To which Crystal-Rose replied, “That seems easy enough.”

Crystal-Rose Lee won the qualifying run. After taking silver in the final she was hooked. She ended the season fourth overall on the Canadian Freeskiing Circuit and won a Sickbird nomination (awarded to the skier who skis and sticks the sickest line) at the World Freeskiing Championships in Kirkwood, California.

The following year (2008), she took the World Freeskiing Championship in Alaska, and placed second overall behind fellow Whistler phenom, Jen Ashton. “By 2012,” says Crystal-Rose, “I started competing less and less because it was costing me way too much money.” Although she was sponsored, she wasn’t being paid to compete

Says Crystal-Rose, “It was a very different time — before Instagram and getting paid for social media posts. Every comp meant being off work while paying for my travel and entry costs, plus my ongoing rent and car insurance and life... The prize money I won barely covered my flight.” 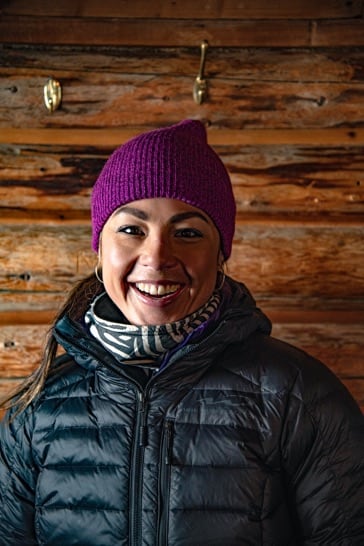 Adds Crystal-Rose, “Skiers don’t go into skiing to make money. My ultimate goal was not to win, but to do well enough to be in a ski movie. Remember, I moved to Whistler because I was inspired by a ski movie. That’s all I wanted. Then the financial crisis hit in 2008 and the money dried up. It just wasn’t good timing.”

Crystal-Rose has since worked as a ski model in ads and promotional films. “I’ve been told that I have great technique and that that translates well on camera,” she says (laughing). Five years ago, she sat down and reassessed her life, skiing and ambitions. She still marvels at how far skiing has evolved, citing fat skis (“anything over 80 mm underfoot represents a phenomenal change”), shaped skis and, most recently, rocker or early rise tips and tails. Today, if she was offered a top spot in a ski movie, she’d probably drop everything” “You know, “ she says, “it’s the whole ‘the mountains are calling, and I must go’ scenario.”

Crystal-Rose currently works for a Vancouver-based athletic brand, “I love fashion and living an active lifestyle,” she says, “so it was a no-brainer for the next phase of my life to push myself professionally in a different capacity, while keeping to my core values.” But come winter you’ll still see her coaching women’s ski camps and her private clients in Whistler and adventuring off the beaten path to ski. Says Crystal-Rose, “Skiing isn’t just a pastime, it’s in my blood and it will always be a part of my life.”

As a Nordica Ambassador Crystal-Rose stays in touch with the ski market, represents and promotes the brand both on and off the snow, and gets to test neat new Nordica products. This year she’s skiing on 177 cm Nordica Santa Ana 110 skis and Nordica Strider 120 boots exclusively. “They’re great skis for Whistler,” she says. “They can carve a mean turn yet float in powder, and they have a nice ‘pop’ to keep it all lively. The Strider 120 boots are great for in-bounds skiing, plus when I want to plan a last minute tour, I don’t have to head down to grab new boots. I have them already on as they have a walk mode and up the hill I go.”

When she isn’t skiing, Crystal-Rose is no couch potato. She trains year-round, does strength training 3 days week, mountain bikes and is currently gearing up for her first marathon this fall. Says Crystal-Rose, “I’m at my best when my mind and body are active. You never know what adventure you need to be ready for.” (laughing)


Being a woman ambassador means Crystal-Rose can bring her ‘sass, spice and love of pink’ to skiing. Says Crystal-Rose, “Women bring a different insight, a different viewpoint. We see things differently. We bring something different to the table. It would be really boring without women. We challenge men, just like they challenge us and push us that much harder.” 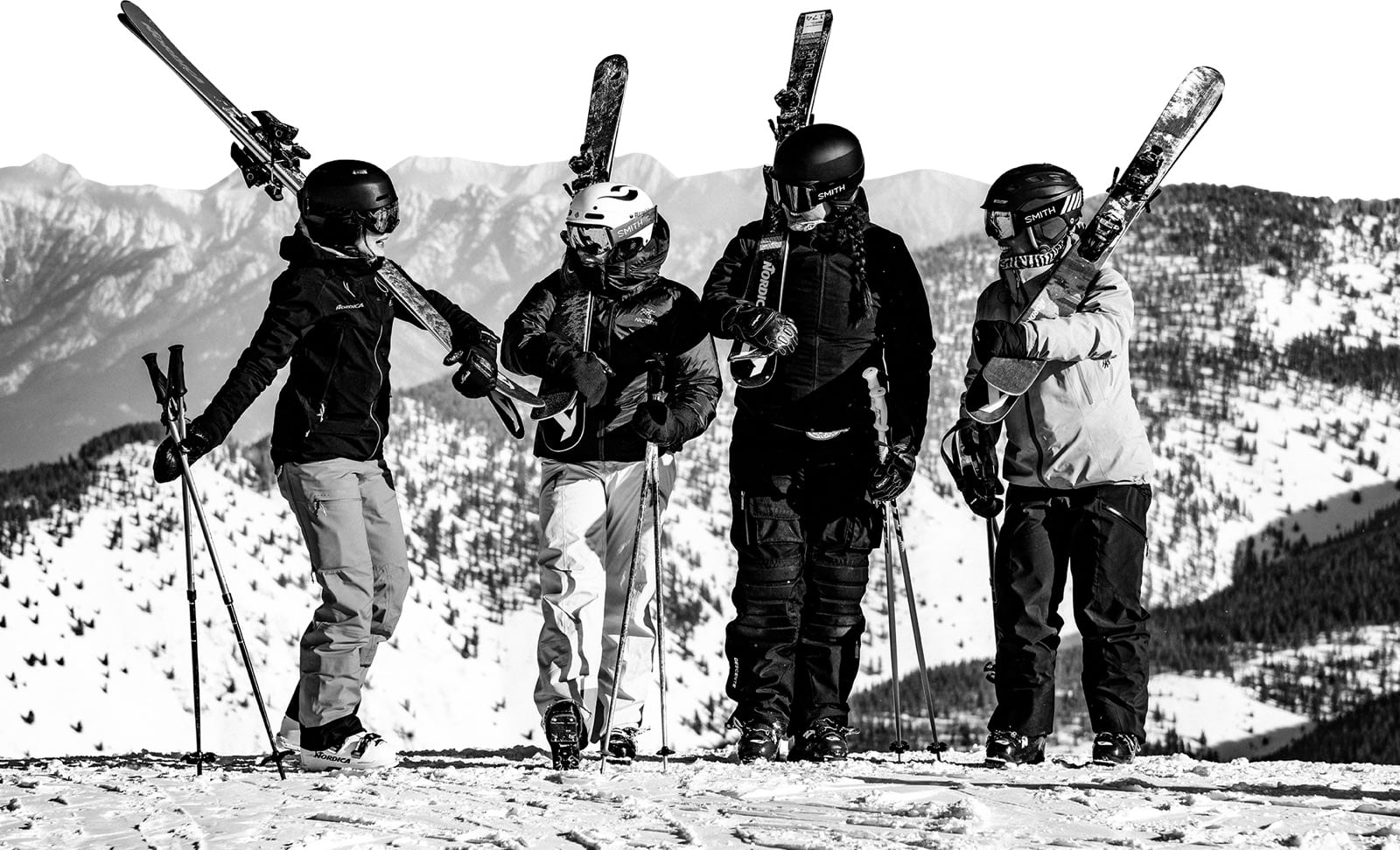 Watch Nordica’s new video about women in the ski industry: