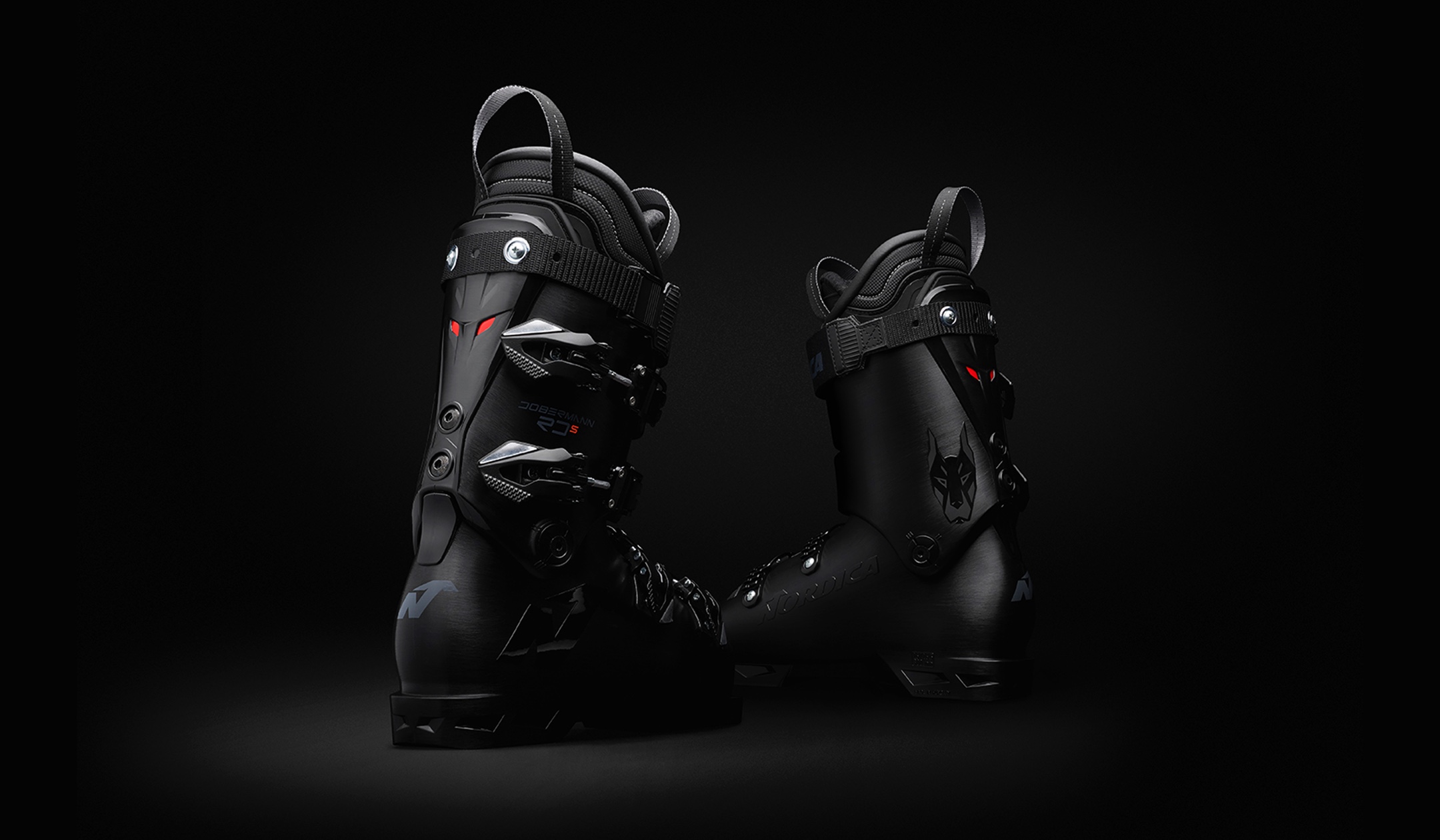 WORLD CLASS RACE BOOTS & SKIS ENGINEERED TO PERFECTION. BRED FOR SUCCESS.
The new Dobermann collection looks as good as it performs. After all, since Nordica’s inception in 1939, the brand has been synonymous not only with performance but also with design. And for the fifth generation of the Dobermann, we wanted to create an aesthetic that was especially worthy of the collection’s legendary lineage. Forged directly into the mold for the shell, the Dobermann’s black embossed logos shine on the boot’s brushed surface.
The classic Dobermann logo adorns the inside of the boot’s cuff and is paired with the penetrating–and aggressive–red eyes that pop on the back of the boot’s spine. Cloaked in black, the boot delivers a stealth appearance that alludes to its vicious performance. 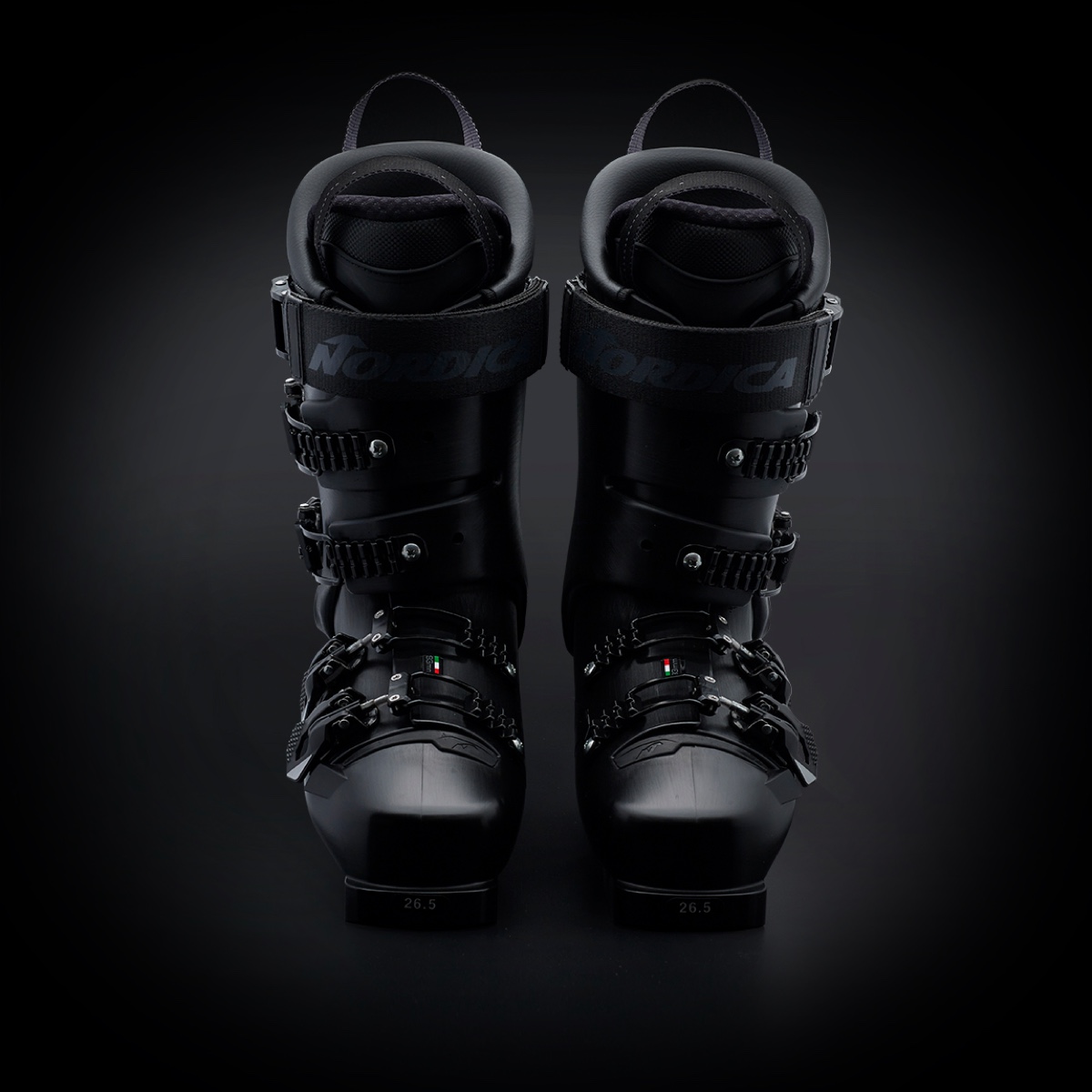 To revolutionize the Dobermann collection, we started with the boot’s shell. By creating the most anatomical shape possible for both the shell’s interior and exterior, we were able to reduce the boot’s volume significantly–especially in the midfoot and heel area. This maximizes precision and response to further boost the Dobermann’s performance.
As part of our efforts, we carefully analyzed and then reworked the heel of the shell, reducing the overall length of the sole–regardless of the boot size–by 5mm. In addition to enhancing the stability of the shell, this reduced sole length enables a ski to flex more naturally and better reach its full potential. And by further refining the shell’s design and construction, we made the boot more responsive, allowing for quicker edge-to-edge transitions. For this fifth generation of the Dobermann collection, we also enhanced the interface between the shell and cuff, increasing the boot’s forward lean to boost control and response when transitioning between turns.

Pairing convenience with exceptional performance, we developed an entirely new sole for the Dobermann collection. Thanks to this new design, it’s no longer necessary to mill the boot’s soles. With a height tailored to the ISO 5355 standard, the Dobermann soles are ready to click into your bindings straight out of the box. And to promote an intuitive, uniform approach to sizing, we’ve abandoned the traditional UK sizing system in favor of the Mondopoint standard 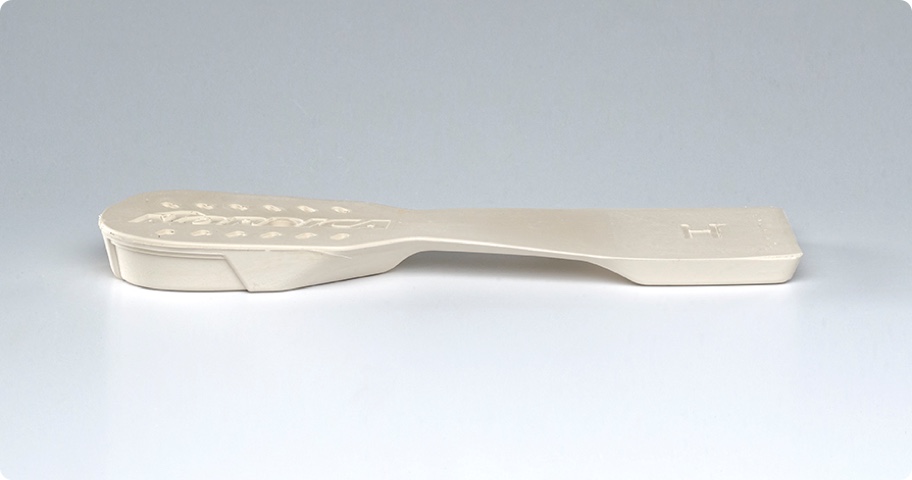 We also redeveloped the Dobermann sole to perfectly match the boot’s new internal shape. Each model comes with both 23 mm and 25 mm wedges that can readily be customized by your local bootfitter. 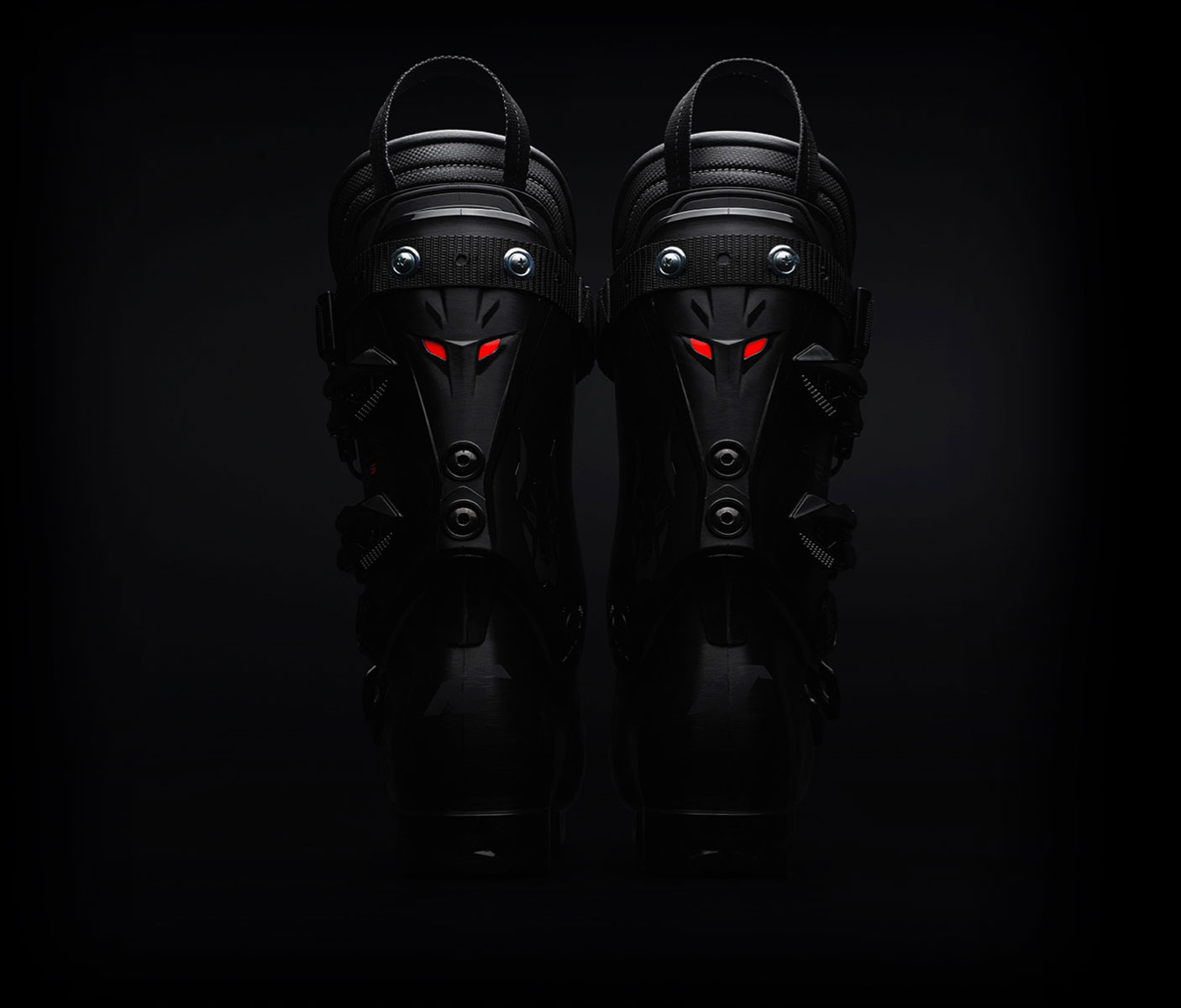 A better boot demands a better cuff.
Consequently, we didn’t just revolutionize the Dobermann’s shell–we also reimagined its cuff. Using our Tri-Force construction, we created a cuff that showcases both an incredibly strong spine and a smooth flex that can readily be customized to control the delivery of power. This amplifies support and accelerates response, allowing you to unleash your full potential. Yet we didn’t overlook aesthetics. Stemming from the complementary densities of plastics used in the shell, the red eyes–contrasted against the boot’s black shell–give a nod to the Dobermann’s namesake. Fast and fearless, this Dobermann holds nothing back. 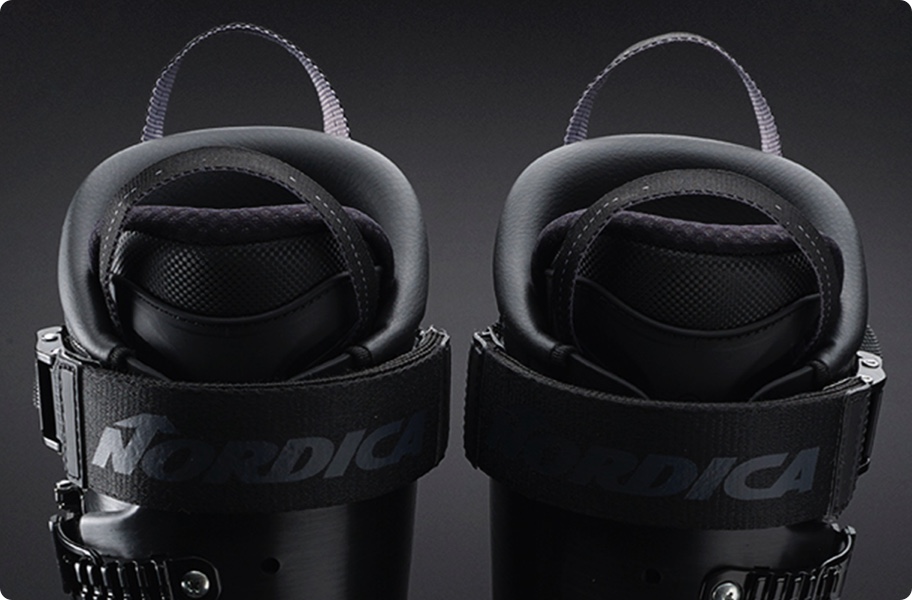 Armed with an eye for detail–and a desire to capitalize on every opportunity to enhance performance–we created an entirely new power strap for the latest Dobermann collection. Each Dynamic Power Strap contains a specific number of elastic bands that are woven together and tailored to the unique flex and design of each boot in the Dobermann collection. These improved straps maximize rebound while boosting control and response

There’s more than meets the eye with the new Dobermann. And this is especially true of the boot’s Heel Link Liner.
Concealed inside the revolutionary shell, this all-new liner is equally essential in amplifying the Dobermann’s legendary performance. Armed with newly patented technology, our Heel Link showcases a band stitched at the back of the liner heel and connected directly to the lacing system. Securing the laces tightens the liner in all directions, anchoring your heel back into the heel pocket and perfectly cradling the contours of your foot. This design enables us to use a thinner material for the liner and create a shorter overall profile for the boot, reducing its sole length by 5 mm. The liner’s thinner upper enhances sensitivity to create a more responsive boot while a slim Velcro closure ensures the upper part of the liner moves in tandem with your tibia. And thanks to the lower liner’s strategic lacing system, the boot cradles the contours of your foot without creating pressure points. To allow you to further customize the Dobermann’s fit and performance, the liner includes a spoiler with an interlocking, two-piece design. Use both spoiler components for maximum forward lean or remove the auxiliary insert to reduce it. Better than ever, the new Heel Link Liner is as fast as it is fearless. 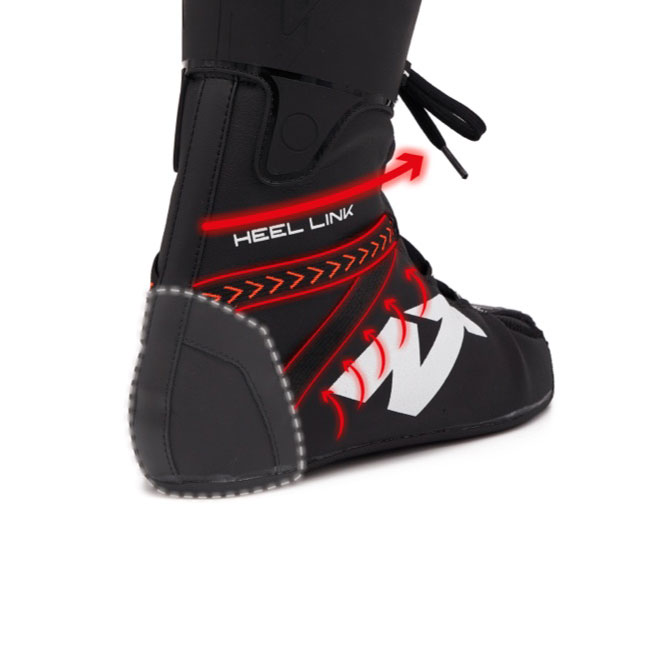 HEEL LINK ANCHORS YOUR HEEL IN THE CORRECT POSITION, PERFECTLY CRADLING THE CONTOURS OF YOUR FOOT. 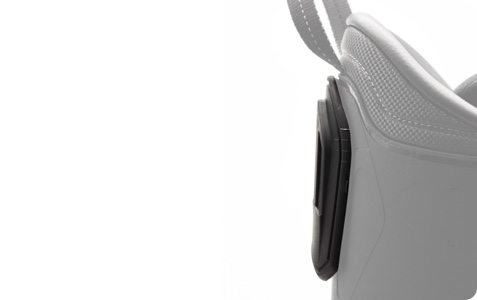 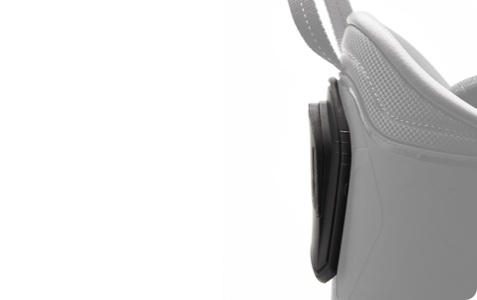 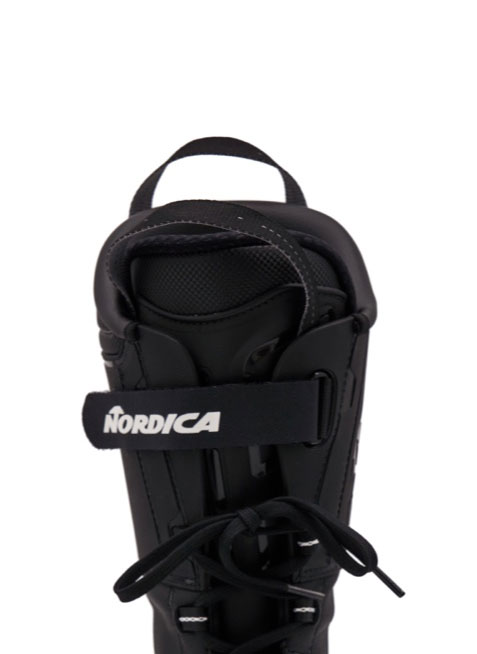 IT ENSURES BETTER CONNECTION WITH YOUR TIBIA. 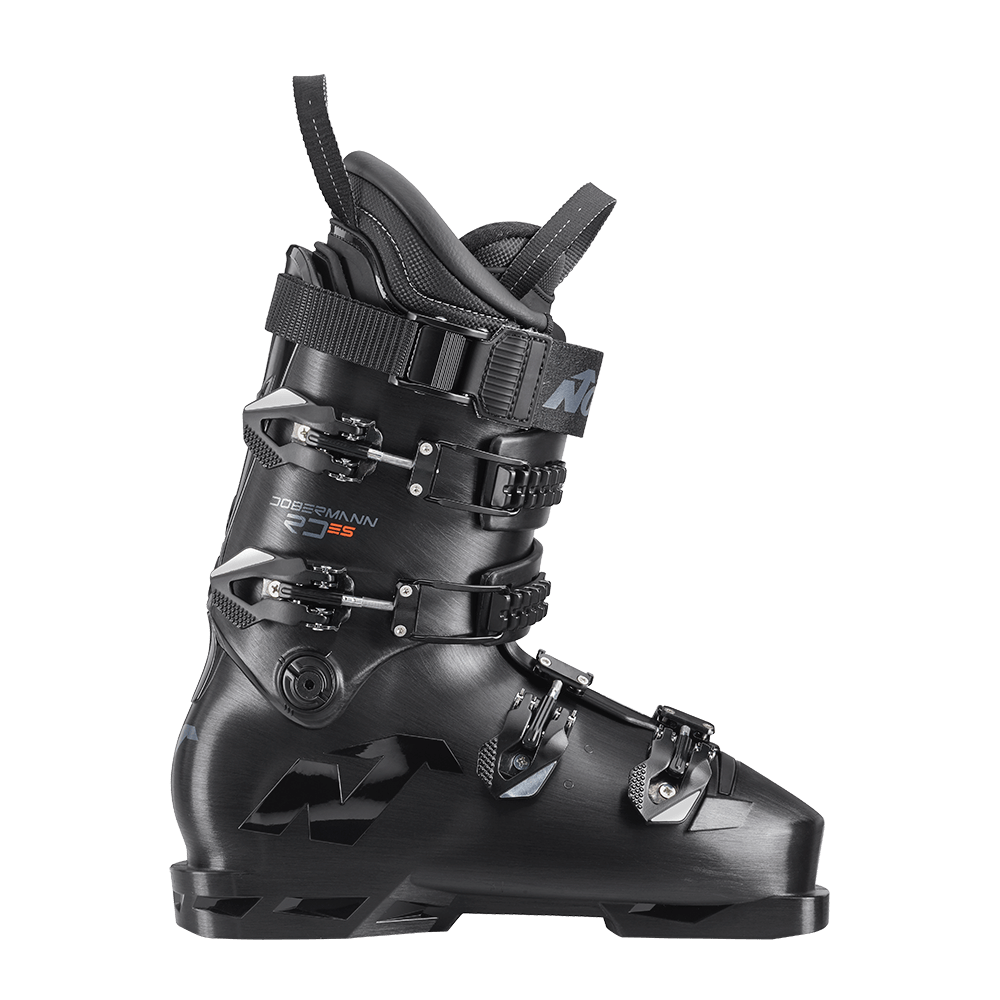 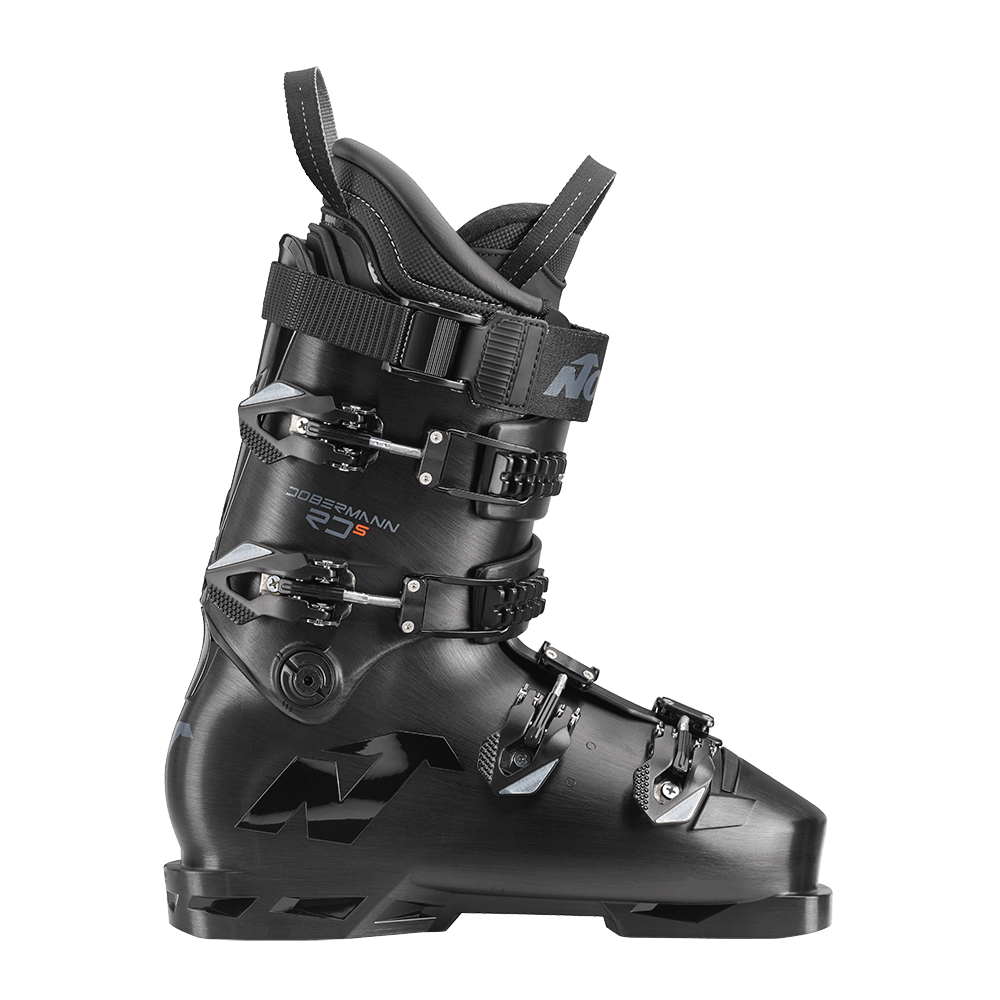 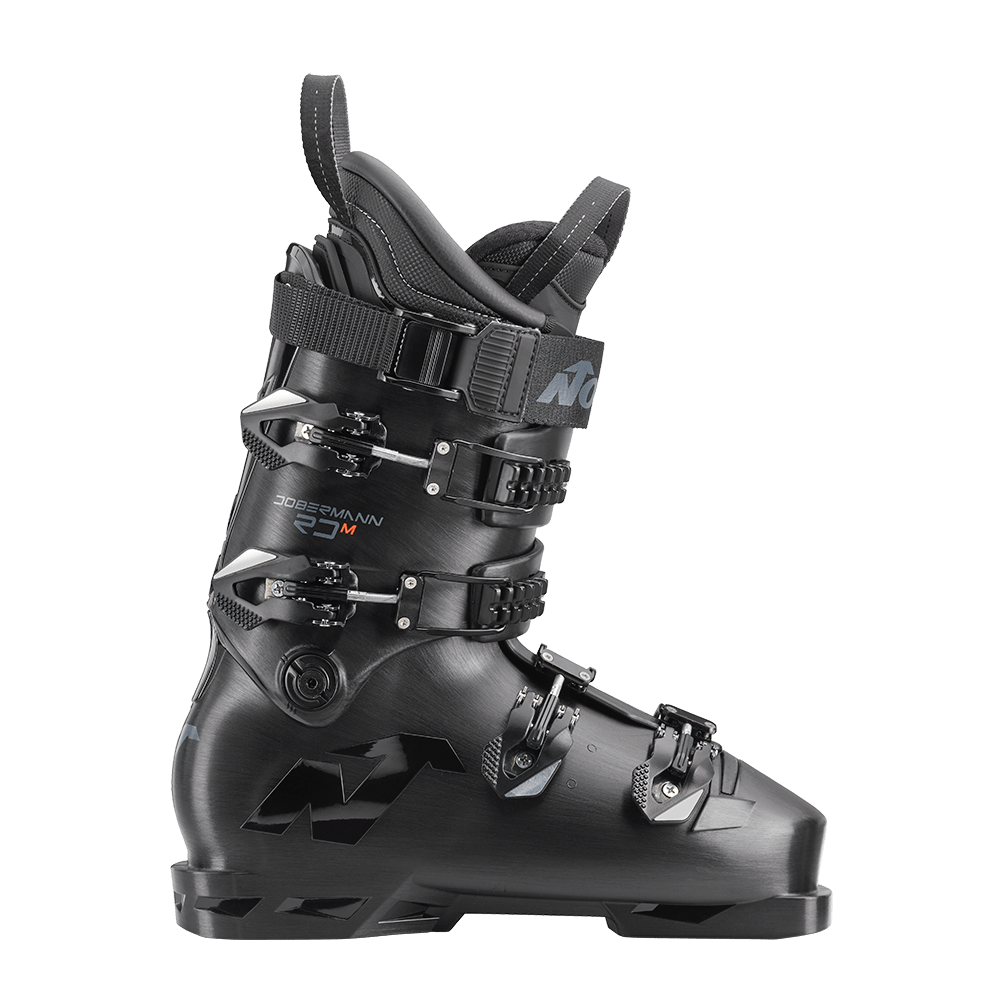 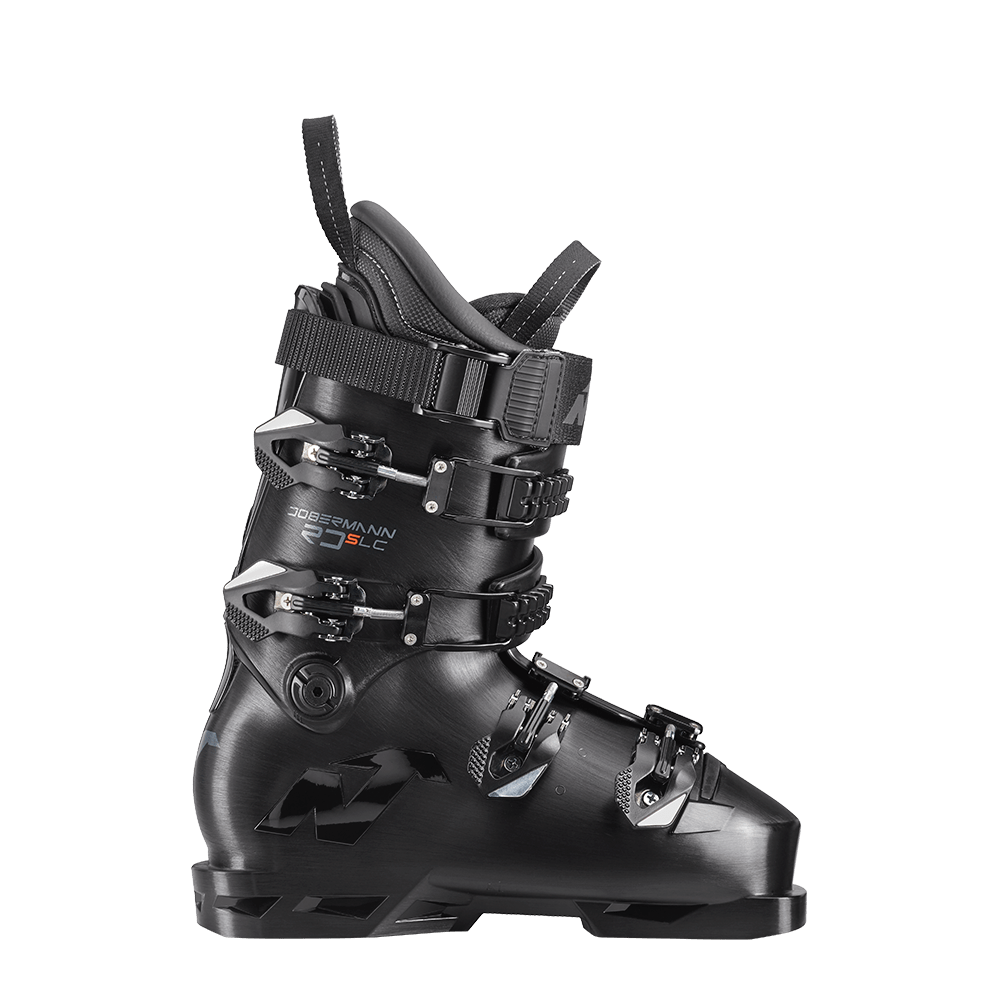 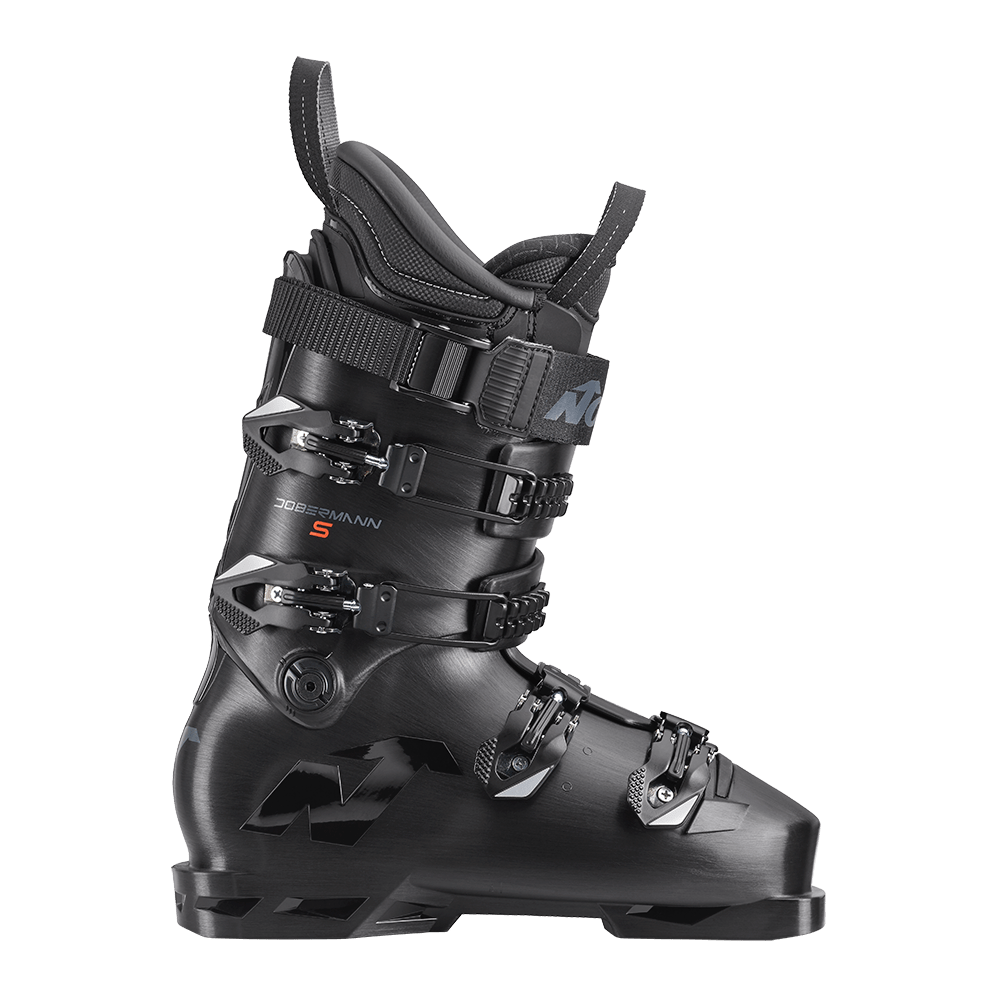 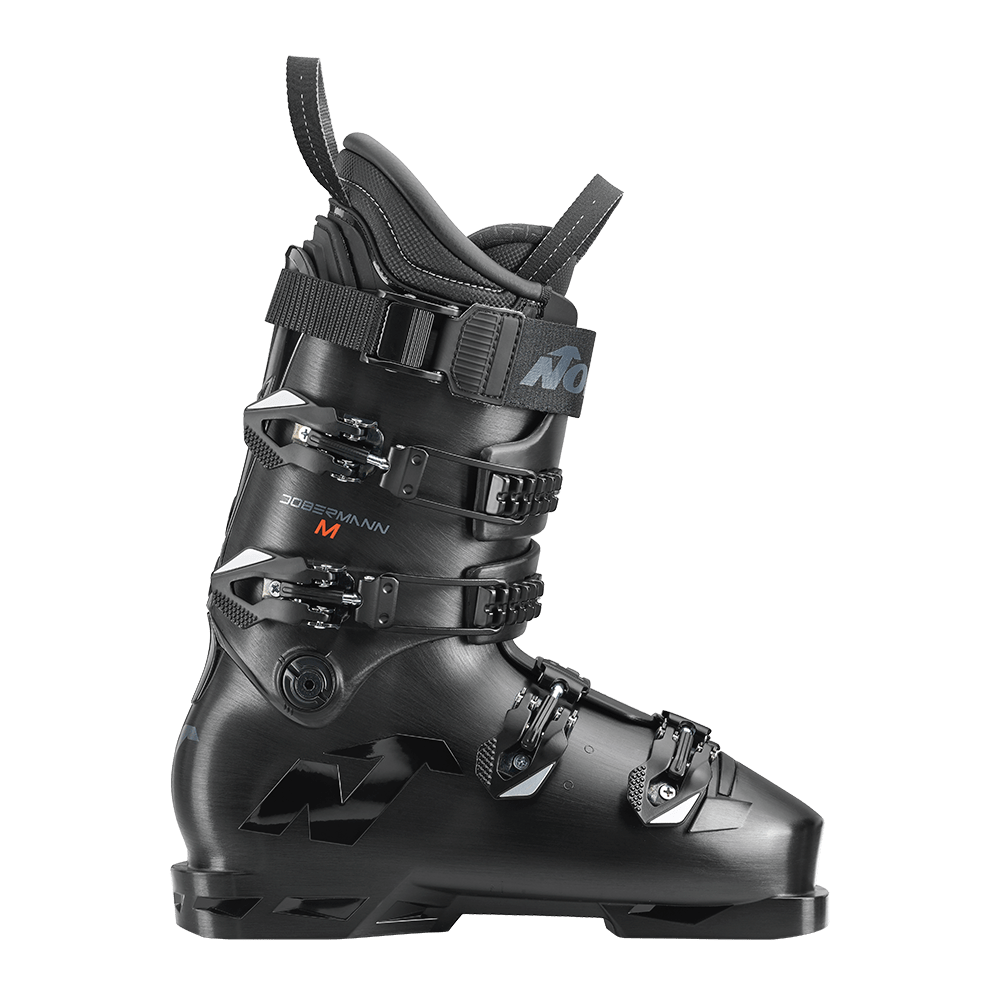 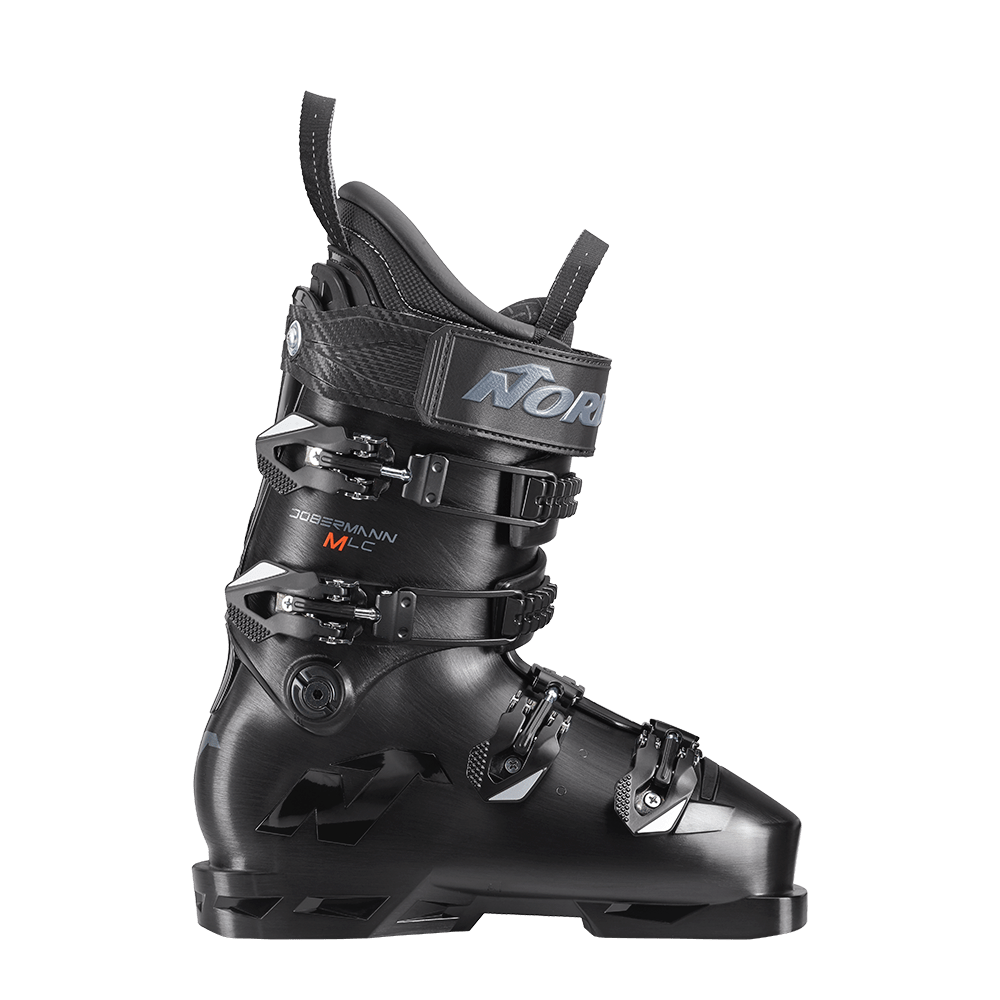 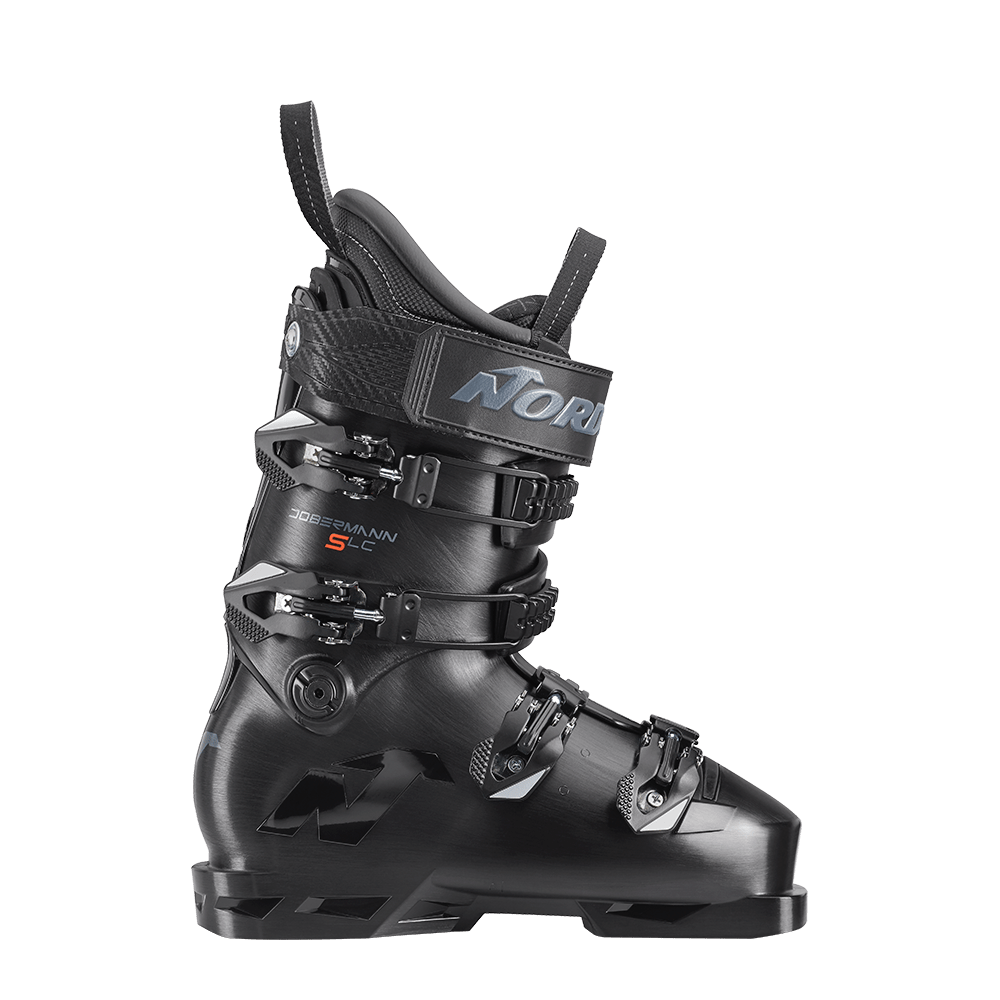 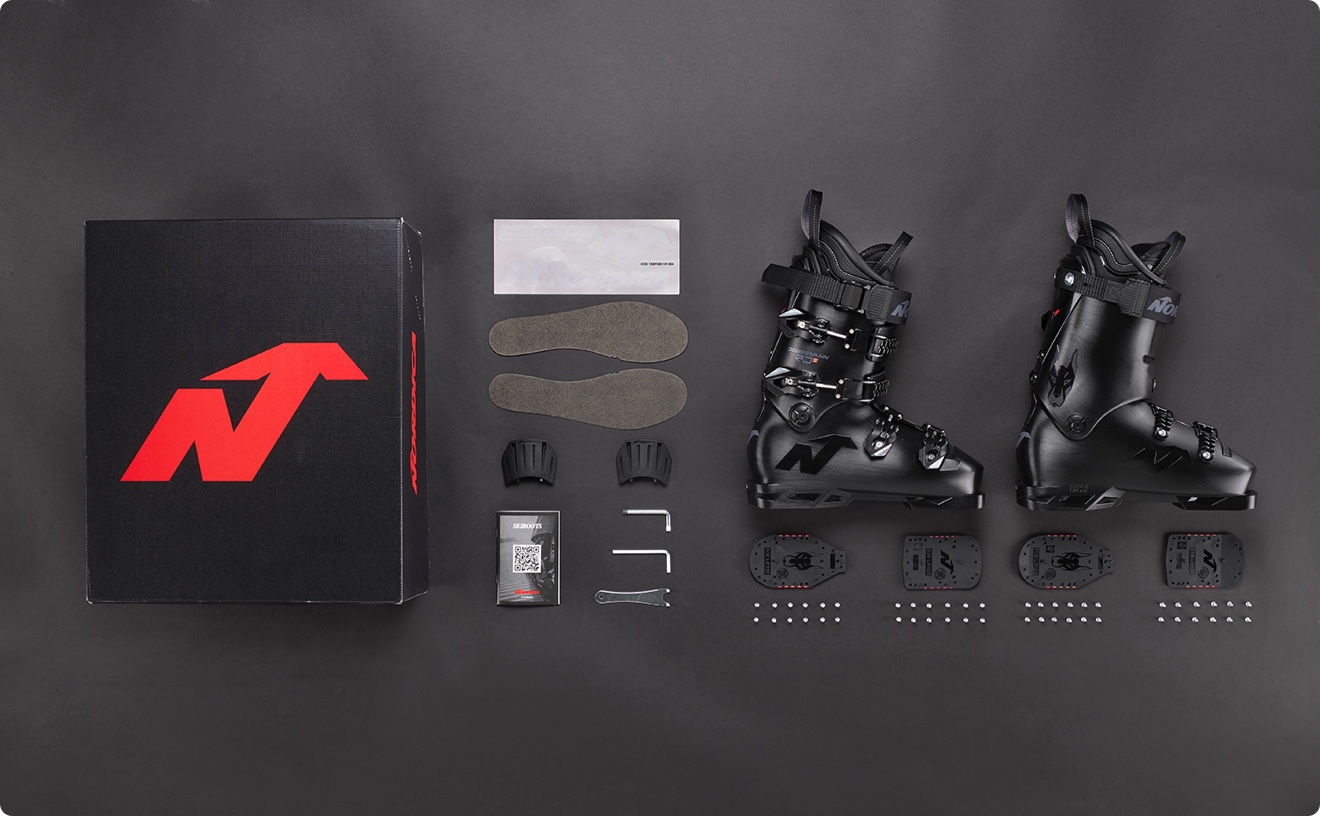